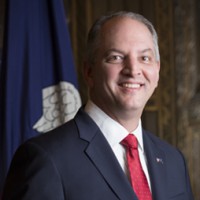 Governor John Bel Edwards was born seventh of eight children to Sheriff Frank Jr. and Dora Jean Edwards. He grew up in Amite, a rural town in Tangipahoa Parish.

He graduated from the United States Military Academy at West Point in 1988 and served on active duty for 8 years, earning Airborne, Ranger and Jumpmaster status.

Edwards left the Army with the rank of captain and moved back home to earn a law degree from Louisiana State University before opening a civil law practice.

In 2008, he was elected to the Louisiana House of Representatives, where he served for eight years.

In 2020, Edwards created the Climate Initiatives Task Force to develop policies to reduce greenhouse gas emissions. He also began the process for offshore wind leasing in the Gulf of Mexico.