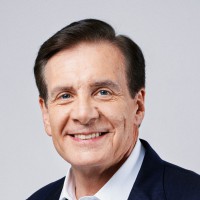 Graff has over 35 years of global experience in the industrial gas, energy, refining, chemicals and polymers industries. He began his career with Amoco and BP, plc. and went on to serve as president or chief executive officer of several global chemical and polymer businesses.

Graff currently serves on the board of directors of Westlake Chemical Corporation as well as a number of industry and civic organizations, including the executive committee of the American Chemistry Council and chairman of its Responsible Care committee. He serves as a member of the Investment Advisory Council for the U.S. Department of Commerce, a principal of the Bipartisan Policy Center’s American Energy Innovation Council, and a member of the Co-Chair’s Coordinating Committee of the National Petroleum Council. Graff serves on the board of trustees of the Illinois Institute of Technology, and the Engineering Advisory Council for Purdue University’s College of Engineering.

Along with his family, Graff participates in a variety of community service programs and activities. He is a strong advocate for STEM education, literacy and youth athletics. Graff is a member of the board of trustees for  the George and Barbara Bush Foundation, the board of directors of Junior Achievement of Southeast Texas, the Leadership Council for Houston Methodist Hospital and the Baker Institute of Rice University.