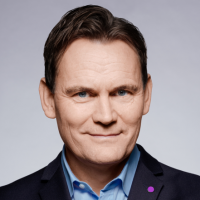 Jon André Løkke was appointed Chief Executive Officer (CEO) of Nel ASA effective 4 January 2016 and stepped down to join the Board in July 2022. Mr. Løkke comes from the position as CEO of Norsk Titanium AS, developing, and industrializing 3D printing technology for the production of titanium components for the aerospace and other industries. He has ten years’ experience from the REC Group, including positions as senior vice president in REC Wafer, investor relations officer in REC ASA and CFO in REC ASA. Mr Løkke has also worked for the ABB Group and holds an International MBA degree from Glasgow University and a Bachelor degree in business and economics from Southampton University.