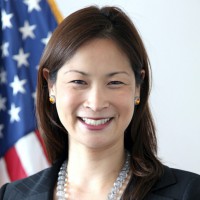 Biden-Harris Administration Presidential appointee Christine Harada serves as the Executive Director of the Federal Permitting Improvement Steering Council (Permitting Council). As Executive Director, Harada manages a portfolio of nearly $100 billion in large-scale infrastructure projects—most of which are renewable energy, coastal restoration, and electricity transmission focused. She leads 13 Federal agencies, state agencies, and project sponsors to develop and implement project-specific timetables for all required infrastructure permitting reviews and authorizations, working to forward the administration’s infrastructure agenda to rebuild the economy.
Harada brings more than 20 years of leadership experience in the public and private sectors to the Permitting Council. Harada was most recently the Vice President for Government Affairs at Heliogen, a California-based renewable energy technology company. Previously, she served as the President of i(x) investments, a company focused on impact-driven investments in critical areas such as renewable energy, green real estate development, and accessible smart and sustainable housing. She was a Partner with Ridge-Lane Limited Partners, an advisory firm of experts in private sector innovation, investment capital, and government policy that works with companies pursuing social and environmental impact, along with financial performance.
As the former Federal Chief Sustainability Officer under President Barack Obama, Harada oversaw all federal sustainability-related initiatives in energy, vehicle fleets, and acquisitions. She also served as the Acting Chief of Staff, the Associate Administrator of Government-wide Policy, and Chief Acquisition Officer at the U.S. General Services Administration.
Harada has worked as a Senior Systems Engineer at Lockheed Martin and as a consultant at the Boston Consulting Group and Booz Allen Hamilton. She holds a master’s degree in international studies from the University of Pennsylvania (Penn) and an MBA in finance from the Wharton School at Penn. Additionally, she has a master’s degree from Stanford University and a bachelor’s degree from the Massachusetts Institute of Technology in aeronautics and astronautics.