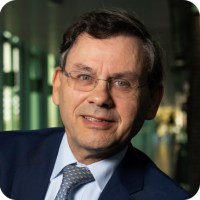 Noé van Hulst is Chair of the International Partnership for Hydrogen and Fuel Cells in the Economy (IPHE), hydrogen advisor to IEA & Gasunie and a Senior Fellow at Clingendael International Energy Programme (CIEP). Prior to that, Mr van Hulst was the Hydrogen Envoy at the Ministry of Economic Affairs & Climate Policy in the Netherlands. Mr van Hulst was the Dutch Ambassador to the OECD from September 2013 to September 2018 and Chairman of the IEA Governing Board. From 2003 to 2007, he worked at the International Energy Agency (IEA) in Paris as Director of Long-Term Co-operation and Policy Analysis. He then became Secretary-General of the International Energy Forum (IEF) in Riyadh, Saudi Arabia from 2008 to 2011. He was Director of the Energy Academy Europe in 2012-2013. Before that, Mr van Hulst worked at the Free University in Amsterdam, the Social and Economic Council (SER) in The Hague and the Ministry of Economic Affairs from 1988, lastly as Director-General for Energy.