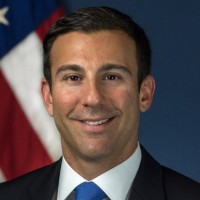 Senior Advisor for Energy Efficiency and Renewable Energy, Office of the Secretary
U.S. Department of Energy

Jeff Marootian is the Senior Advisor for Energy Efficiency and Renewable Energy in the Office of the Secretary. Marootian previously served as a Special Assistant to the President in the White House Office of Presidential Personnel.

Marootian previously served in District of Columbia government as the Director of the District Department of Transportation, where he piloted sustainable transportation technologies, oversaw the effort to electrify the city’s Circulator bus fleet, and led the city’s early adoption of the Transportation and Climate Initiative.

Marootian oversaw the modernization of hundreds of miles of roads and sidewalks and advanced critical infrastructure projects, such as the reconstruction of the Frederick Douglass Memorial Bridge and expansion of dedicated bus and bike lanes. Marootian previously served in the Obama-Biden Administration as the Assistant Secretary for Administration and Chief Sustainability Officer at the U.S. Department of Transportation.

He is an alumnus of The George Washington University, where he has also taught as an adjunct faculty member in the Trachtenberg School of Public Policy and Administration.