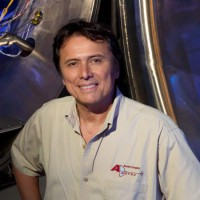 Franklin’s story is one of insight and determination on the part of a
young man born in San José, Costa Rica who decided at the age of seven that he needed to come to the United States to become an astronaut. At 18, speaking only Spanish and with $50 in his pocket, he traveled to the US for the first time. A year later he’d learned English and earned a scholarship to study Mechanical Engineering at University of Connecticut before going on to MIT for a doctorate in Plasma Physics and Controlled Fusion where he initially conceived the idea for the VASIMR®, a rocket engine which promises to revolutionize space travel and put our entire solar system within reach. Franklin became a citizen while conducting research in nuclear fusion and became NASA’s first Latin American astronaut in 1980. At that time, only military personnel flew the missions while scientists engineered the rockets and commanded crew from ground control. In 1986, hard work paid off and he took his first trip to space aboard the shuttle Columbia and went on to tie the world record for missions flown having accomplished seven shuttle missions and over 1600 hours in space, including 19 hours of space walks to help build the International Space Station. Franklin’s second mission was originally slated to be the ill-fated Challenger mission in 1986, but his crew got reassigned to the Columbia mission which flew just months before.

After 25 years of government service, including founding and directing NASA’s Advanced Propulsion Laboratory, Dr.Chang Díaz retired from NASA and established Ad Astra Rocket Company and has continued the work to bring VASIMR® to space flight readiness in partnership with NASA. VASIMR® enables numerous in space missions & operations. These missions include the removal space debris that currently orbit the Earth, cargo transfers to the moon, the deflection of potentially threatening asteroids, and even the potential of faster, more efficient manned missions to Mars and beyond. Ad Astra’s Costa Rica facilities also boast the first carbon-free hydrogen transportation ecosystem in all of Latin America and operate the first Hydrogen Fuel Cell bus in Central America. Their goal is to help implement clean energy solutions and be an example for other developing countries to achieve self-sustainable, carbon-free, energy.